One of the most complex and most commonly injured joints is the knee joint (articulatio genus). In sports medicine these are treated as sports-related injuries because in most cases these injuries occur during sports activities. Due to its shape the joint is not stable. For its stability it depends on ligaments, capsule and muscles.

The knee can perform several movements – bend (flexio), extend (extensio), and while bending it can rotate externally and internally (rotatio).

Joint capsule (capsula articularis) is the binding membrane that secures the tightness of the knee joint and it is additionally supported by the ligaments in the joint. These are passive stabilizers of the knee of which the most important are the anterior and posterior cruciate ligaments (ligamentum cruciatum anterior et posterior). They oppose the forces which separate the joint surface of the femure or move the tibia underneath the femure and to the front or the back towards the medial and lateral collateral ligaments. The spraining of the anterior cruciate ligament is a common sports injury which can be treated relatively quickly. But, fractures lead to the tearing of the knee cartilage – usually medial meniscus. If the knee is hit during sports activities (contact sports, ball sports) an injury with swelling may occur. Bleeding in the knee may also appear as a consequence as well as reduced movement, stiffness and knee pain.

The posterior cruciate ligament is tougher than the anterior, so injuries are less frequent and less severe, and treatment is usually non-invasive. 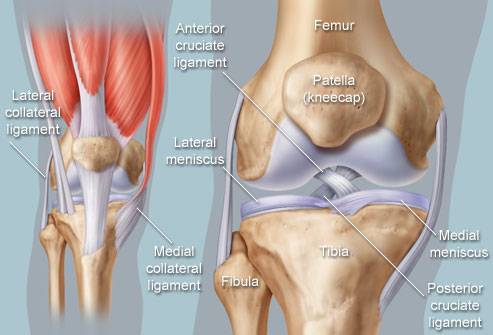 The most common knee injuries in sportsmen 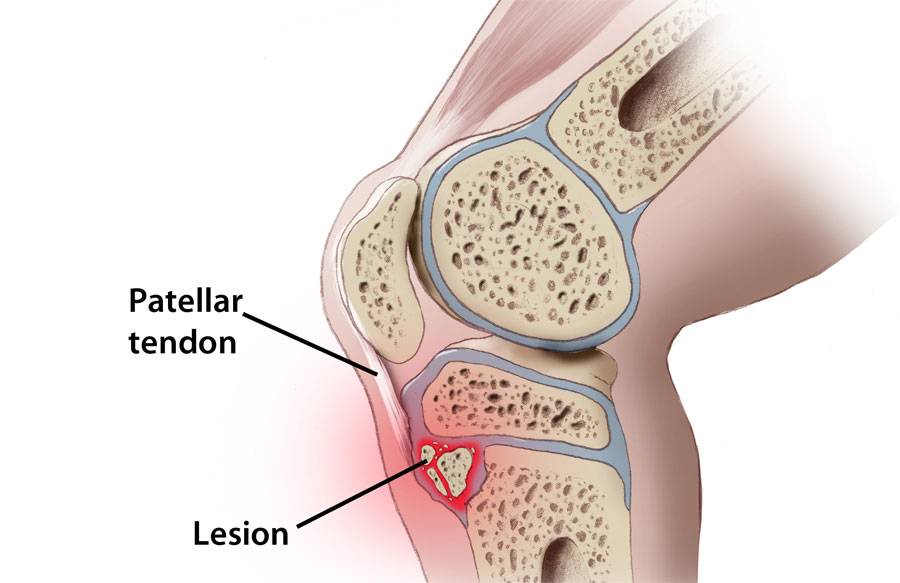 This condition was first described by the American surgeon Osgood and Swiss surgeon Schlatter in the beginning of the twentieth century.

It is the most common injury in sports where jumping, running, extension of the knee under heavy strain (volleyball, handball, basketball, high jump, long jump, hockey, triple jump, tennis, running … )  is required. In the adolescence bone growth is faster than the growth of muscle and tendon structures, so that during vigorous sports activities contractions of the ‘short’ quadriceps occur frequently and in this way avulsion fractures occur in the upper region of the tibia.

The main symptom is knee pain, which is more severe when running, jumping, kneeling, squatting and walking down and up the stairs, and the pain reduces when resting. A swollen knee is usually warmer than the surrounding tissue and it may also be red.

It is important to conduct an adequate diagnostic procedure which will lead to a correct diagnosis.

Sports activity should be allowed in the amount which does not cause pain (for example swimming). In the accute, painful stage it is necessary to apply ice (trying to avoid direct skin contact; knee massage is not advised). Later on it is important to do knee extension exercises. If training is  proceeded despite the mild pain it is recommended to use knee braces. Unsupervised placement of orthotics may lead to deterioration. 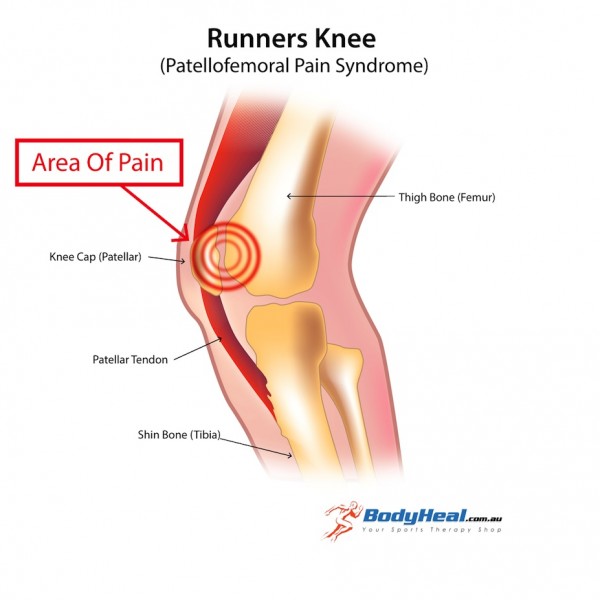 Runners knee is a condition which is also referred to as Patellofemoral Pain Syndrome.

Injuries are most common in professional athletes and long-distance runners. Among the risk factors which may cause this injury are: the high location of the patella, X-legs, wide pelvis in women, excessive downhill running, excessive sports activity, inadequate sports footwear (worn-out shoes). 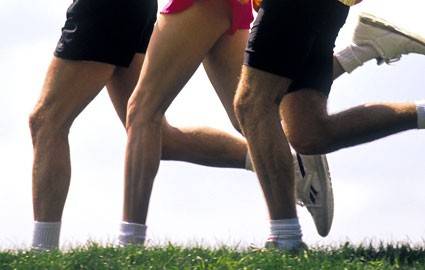 The main symptom is knee pain which usually occurs in the patella or nearby it, especially along the inner edge or under the patella. The pain may occur as a consequence of spending too much time sitting with knees bent and it gradually decreases while walking or increases while squatting.

For an accurate diagnosis it is necessary to visit a doctor because knee pain may occur as a consequence of many other diseases such as: ligament injury, meniscus injury, knee arthritis… When walking crepitation may occur along with pain, and in some patients the knee may swell and the swelling may subside when resting.

It is necessary to quit sports activities, and to avoid lifting heavy weight.

Recommended medicines are (with doctor’s consent) non-steroidal, anti-inflammatory drugs (Ibuprofen, Voltaren …), application of ice (no longer than three days), and exercises to strengthen the knees (quadriceps) may start when the pain stops.

The main role of meniscus is to stabilize the knees when in motion. A swelling may appear due to everyday strain and stress which cause injuries and damage to the knees. Often, the only solution is knee surgery. Postoperative convalescence period is not long. Soon after the surgery sportsmen return to their sports activities.

There are two menisci (medial and lateral), which may be injured suddenly, but mostly injuries are a consequence of a series of smaller injuries which result in a swelling, the inability to move the knee and fracture.

Injuries which do not require surgery (pain and a smaller degree of stiffness that does not inhibit motion), are usually treated through physical therapy, laser, ultrasound, magnet therapy, electrotherapy and later on specific exercises which lead to the stabilization of the knee.

Cartilage and meniscus injuries often exhibit the same symptoms, so it is very important to give the right diagnosis.

Research has shown that patients who have undergone surgery (one or both menisci removed), are under increased risk of suffering from knee arthrosis, so there is a tendency to remove the meniscus partially rather than completely, and in certain cases the meniscus may even be sewn. 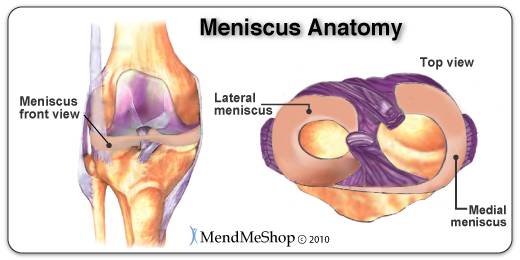 Arthrosis is a degenerative joint disease the causes of which are still unknown. It is considered that some factors may contribute to the occurrence of the condition: genetic predisposition, hormonal disbalance, the aging of tissue, various external factors…

Depending on the cause arthroses can be divided into:

The knee joint is the most frequent location of arthrosis–gonarthrosis.

The main symptom is pain, which occurs primarily when going up and down the stairs, and short-lasting stiffness during those first moves after resting. New symptoms develop later – reduced movement, joint enlargement, instability of the knee. These changes cause knee buckling and collapsing.

A diagnosis requires an anamnesis, clinical examination, but also radiology procedures. The proper treatment is established by relying on these techniques. It should be noted that changes on cartilage and bones are irreversible, but steps can be taken towards reducing the pain and spasms, preventing contractures and improving the quality of life.

This is why not only medicines are recommended (antirheumatics, analgetics…) but also physiotherapy (hydrotherapy, kinesitherapy, electrotherapy) and in certain cases surgery. 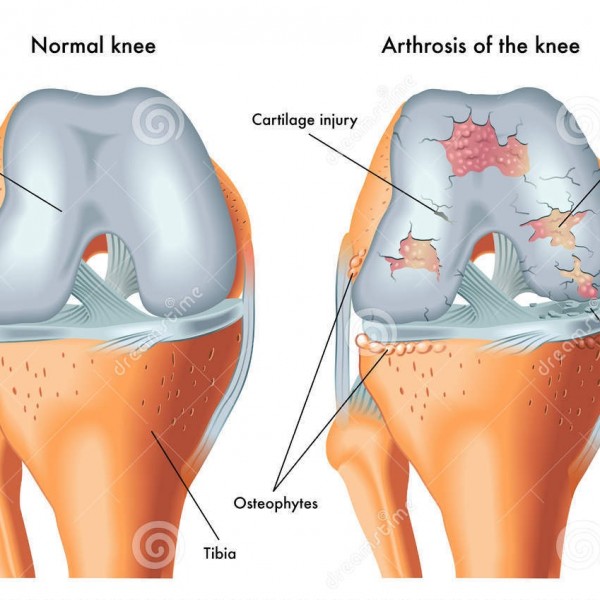 By stimulating specific acupuncture points and through static magnetic field stimulation a significant improvement in blood circulation is achieved, as well as pain alleviation, the relaxing of the muscles and the improvement of the general condition of the organism.

The magnetic system for the knee is clinically tested and recommended for diseases and conditions such as: 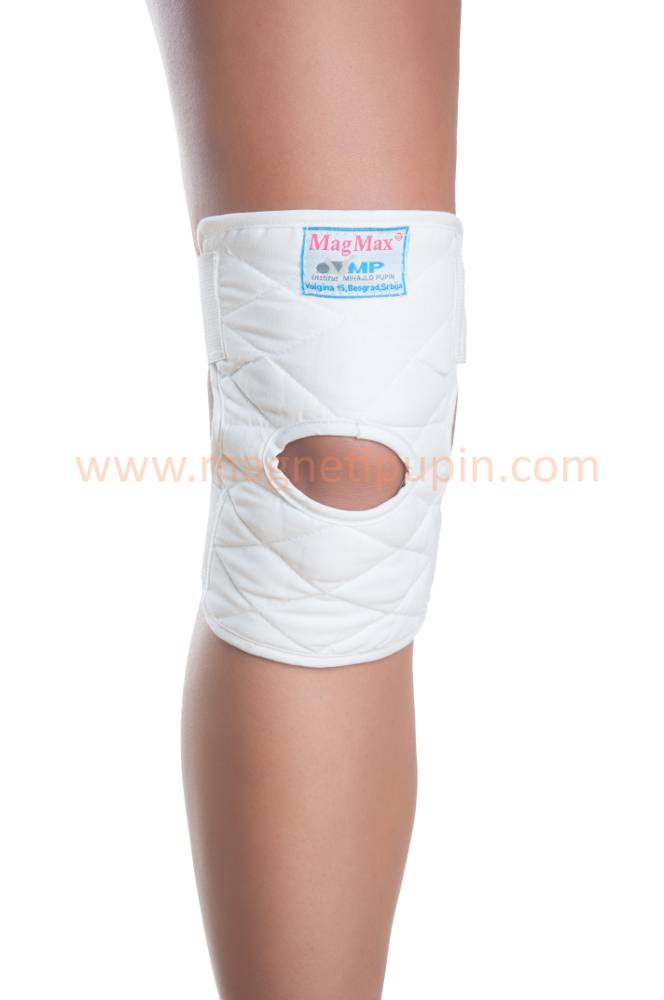 Magnetic System for the Knee