The product and the invention exist since 1983 and are patented (Euro patent and Canadian patent). The experts of Institute Mihajlo Pupin from Belgrade in cooperation with the most eminent doctors of that period, and one of them was Dr Nikola Dekleva, made a product for treating hemorrhoids termed Magnetoplag. Dr Adam Selea defended his PhD thesis titled ‘Hemorrhoid Disease Treatment with Magnetic Fields’ on the School of Medicine, University of Belgrade in 1990. In clinical trials he used magnetoplag.

Magnetoplag is a product which Mihajlo Pupin Institute has produced since then and in the former Yugoslavia it could be bought in pharmacies. Magnetoplag is protected by Euro patent and Canadian patent laws which are still effective. Magnetoplag is currently the only medical instrument which is produced in Serbia and has the CE mark. CE mark is the evidence that the product and its inventor fulfill all of the European – world health norms and standards in the production of it and that the product may be registered and marketed in any country in the world.

Magnetoplag has been marketed in the former Yugoslavia, and now Serbia since 1983, then in Germany, Poland, Russia and so on. During all this time Mihajlo Pupin Institute Belgrade has had the documents necessary for the production and marketing of magnetoplag in all of these countries. Of course, everything has been produced in Mihajlo Pupin Institute in Belgrade. It should not be used for conditions such as cancer, colon polyps and if there are metal implants in the pelvic area.

If you have any kind of problem with the colon it is important to visit a proctologist (a specialist for the colon) and not to attempt treatment on your own. If the diagnosis is hemorrhoids we recommend magnetoplag.

Experts from Mihajlo Pupin Institute claim that your condition will be cured. The product can last indefinitely and can be used if hemorrhoids return after a couple of months or years depending on your metabolism and circulation, line of business, diet and life style.

Of course, the manufacturer possesses documents which guarantee the products’ safety for all of the installed components of magnetoplag. 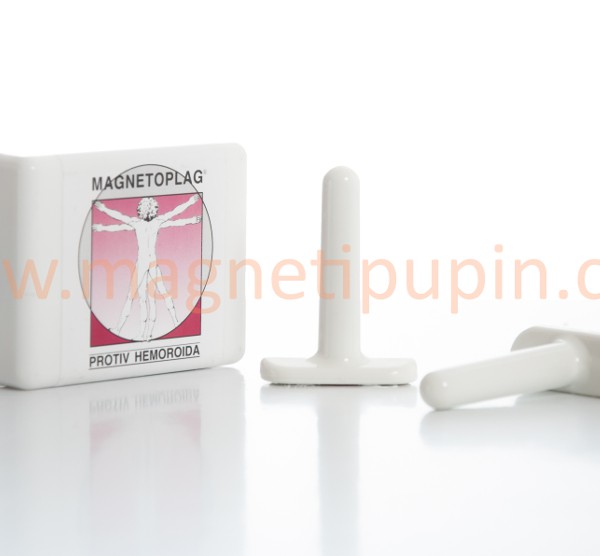